To help plan exoplanet transit observations, the NIRISS team has developed tools and simulators. Below are three external links.

The Instrument Team’s SOSS 1D Simulator incorporates our knowledge of the instrument with BT-Settl star spectra and a wide choice of planet atmosphere models to produce transit spectra realizations representative of the expected SNR for the observational strategy chosen in input. This user-friendly 1D simulator assumes that flux was extracted optimally, i.e. the noise is strongly dominated by the target shot noise but includes readout noise and an optional noise floor.

The SOSS Contamination Tool helps choosing a suitable observing date and position angle that minimize spectral trace contamination by other field stars (remember, the SOSS is slitless). This tool has two engines: One simply calculates visibility periods; the other uses the 2MASS targets in the field to determine where their respective traces overlap the target traces. The zeroth, first and second orders of the field contaminants are considered.

The Instrument Team’s SOSS 2D Simulations are much more involving. The code generating images reside on a Github page currently led by Jason Rowe. This is not a simulator per see but a series of python tools to produce realistic time-series of 2D images for a transiting exoplanet and tools to do the optimal extraction. This is a work in progress. The wavelength-dependent stellar limb darkening is properly taken into account to produce realistic transit shapes across the SOSS spectral domain. Simulated 2D images can be found here for a few exoplanet systems.

Here is an example of the output generated by the SOSS 1D Simulator:

Here is an example generated by the SOSS Contamination Tool: 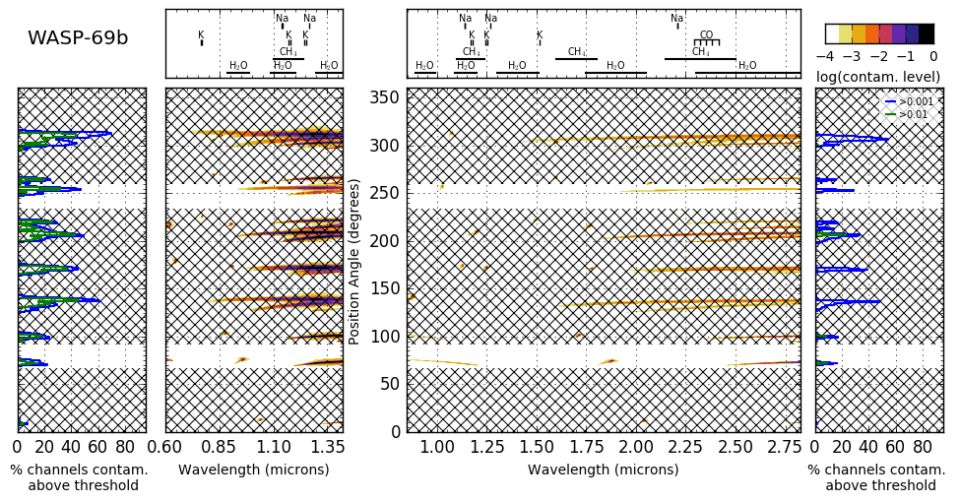 Here is an example generated with the SOSS 2D Tools, full sets can be found here: