The icy plumes of Enceladus, one of Saturn’s icy moons, were visited by NASA’s Cassini probe to better understand the liquid ocean found underneath the moon’s ice crust. Credit: NASA/JPL.

Humans have known about the existence of planets other than Earth for thousands of years. Our ability to observe them closely is much more recent, however. Webb will allow scientists to study them in greater detail than ever before.

In our own Solar System, we see a variety of different types of celestial bodies, and have sent spacecrafts to explore many of them. Some of the most intriguing objects are the moons of the gas giant planets, Jupiter and Saturn.

Astronomers have also discovered thousands of exoplanets beyond our Solar System in the last few decades. These worlds vary greatly from large rocky “super-Earths” to gigantic “hot Jupiters” found very close to their parent star.

Webb will be able to study the atmospheres of Solar System bodies and exoplanets, determining the elements that make them up. This will unveil these worlds’ potential to support life and may even detect signs of alien life known as biosignatures. 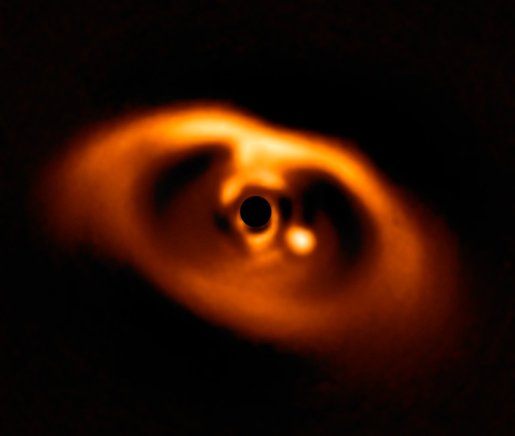 The European Southern Observatory’s Very Large Telescope took the first picture of a planet being born in a protoplanetary disk. The planet stands out, visible as a bright point to the right of the centre of the image, which is blacked out by a mask used to block the blinding light of the central star. Credit: ESO/A. Müller et al.

Webb’s ability to observe the Universe in the mid-infrared will also allow astronomers to study solar systems as they are forming. These young dusty systems are found in “protoplanetary disks” that block visible light and can only be studied using instruments like those on Webb.

A Canadian team is leading the NEAT project which will study the atmospheres of exoplanets using the Canadian-built Webb instrument NIRISS. 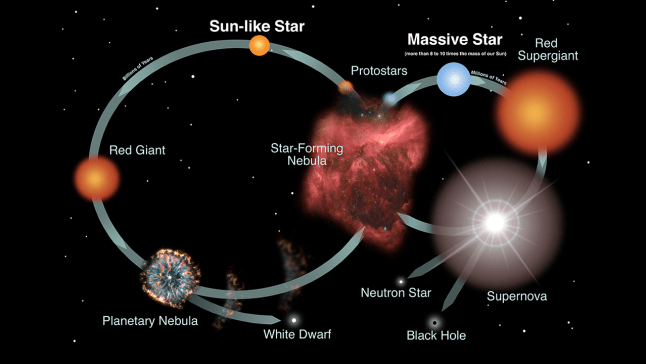 A star’s lifecycle is strongly affected by the star’s massive, but always follows a certain path: birth, fuel burning, running out of fuel, and death. Average sized stars like our Sun will turn into Red Giant stars after many billions of years before they shed their out layers into a planetary nebular and leave behind a White Dwarf. Very massive stars will quickly puff before exploding in a supernova and leaving behind either a neutron star or a black hole. In either case, the dust and gas shed from the star’s death will be recycled into a nebula where new stars will be formed. Credit: NASA/Night Sky Network.

The Sun and other stars seem unchanging in our sky, but they actually change drastically throughout their lifetimes. Their lifetimes, unlike those of humans, can last several millions or even tens of billions of years.

Understanding the lifecycle of stars means understanding the elements that make up our bodies and most of the living beings and objects around us. Is it indeed true that we are all all made of star-stuff. As stars burn fuel and eventually die in impressive explosion, they act like massive factories where the raw building blocks of the Universe are created, recycled and redistributed.

Depending on the mass of a star, the course of its life can take very different paths. A star like the Sun will puff up into a red giant star before blowing off its gassy envelopes and leaving behind a lone jewel, a white dwarf star.

A high mass star, at least five times more massive than our Sun, will instead explode into a spectacular supernova once it runs out of fuel. Depending on the mass of the remnant leftover from the explosion, it will collapse into either a small, very dense core of neutrons called a neutron star or a black hole. The gravitational pull of these black holes is so intense that even light cannot espace it, making them unobservable and very hard to study.

Many stages of a star’s life are still shrouded in mystery — and quite literally shrouded in dense clouds of dust and gas that visible light cannot penetrate. Infrared light can travel through these clouds. Webb will be able to gaze through the dust and gas and shed light on previously unseen stages of stars’ lifecycle. 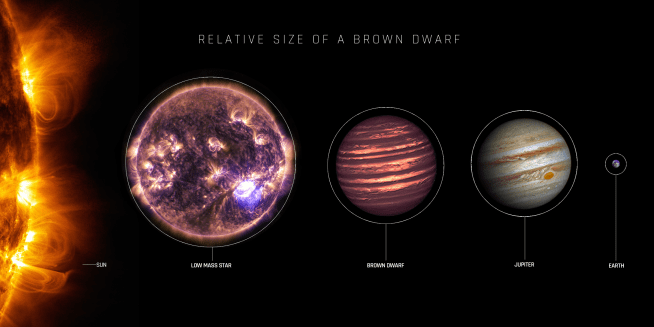 A brown dwarf is a strange cosmic object that is not quite a low-mass star and not quite a gas giant planet. Credit: NASA/ESA/A. Simon, NASA GSFC.

Scientists are also aware of a strange type of cosmic object called brown dwarfs. These are not easily classified as planets or stars, but have characteristics of both. They are not massive enough to create their own starlight, but they are still hotter than planets and thus glow in the infrared. This makes Webb the ideal telescope to study brown dwarfs and hopefully better understand their nature.

An international team lead by Canadian astronomer Els Peeters will study the regions around very massive stars to better understand how these stars affect their environment. 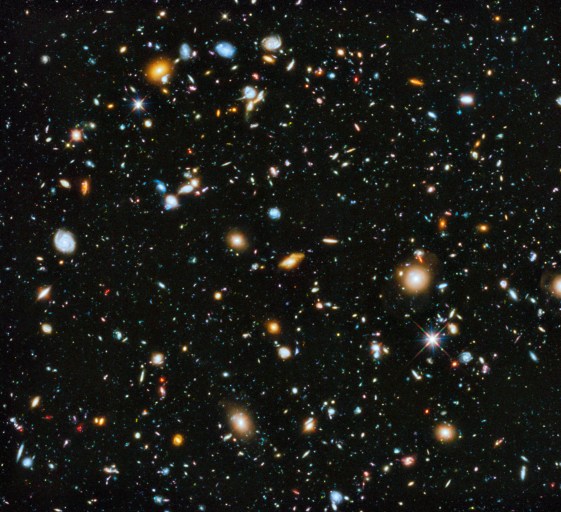 The Hubble Ultra-Deep Field image displays some of the most distant galaxies ever observed by an optical telescope. Credit: NASA/ESA/H. Teplitz and M. Rafelski (IPAC/Caltech), A. Koekemoer and Z. Levay (STScI), R. Windhorst (ASU).

Until the early 1900s, our own galaxy — the Milky Way — was considered a lone island Universe with nothing beyond it. Astronomer Edwin Hubble managed to prove in 1923 that a fuzzy patch in our sky called the Great Andromeda Nebula was actually located outside of the Milky Way. This single discovery unveiled the vastness of our Universe littered with countless galaxies of which the Milky Way is but one.

The Hubble Space Telescope observed galaxies in “deep fields” of our Universe that look back billions of years across time. Using these images, astronomers determined that the appearance of galaxies has greatly changed over the course of the Universe’s 13.8 billion year history. About 10 billion years ago, galaxies were much more active, were colliding together more frequently and were forming stars at higher rates.

Galaxies formed only a few hundreds of millions of years after the Big Bang glowed very brightly in the ultraviolet and visible ranges of light. Due to a phenomenon called “redshift”, this light has shifted into infrared light when it reaches us. In order to study these very early galaxies, Webb’s infrared instruments will be extremely valuable.

Using some of Webb’s instruments called spectrographs, scientists will also be able to break down galaxies’ light to study the elements and processes that fuelled the formation and activity of young galaxies and their young stars.

Finally, Webb will also help scientists study some of the most puzzling parts of galaxies, including their supermassive black holes at their centres and the mysterious dark matter that seems to permeate through space without emitting any light.

A Canadian team is leading the CANUCS project which will study some very early galaxies and galaxy clusters using the Canadian-built Webb instrument NIRISS.

Webb will be able to see back to when the first bright objects (stars and galaxies) were forming in the early Universe. Credit: STScI.

Scientists have given a name to the very first moment of our Universe: the Big Bang. This instant in time remains shrouded in mystery, but better understanding our past may also help us understand our future.

Astronomers have calculated the age of the Universe to be about 13.8 billion years. The Hubble Space Telescope was able to see the first 500 million of those years. With its larger mirror and infrared instruments, Webb will be able to see even further back to the formation of some of the first galaxies.

Because light takes time to travel through space (300 000 km per second), the light we observe here on Earth from celestial objects is actually quite old and was created by these objects many years ago. Light takes 8 minutes to travel from our Sun to the Earth, which means that we see the Sun as it was 8 minutes ago. We say that the Sun is at a distance of 8 “light minutes” from Earth.

Because of its large mirror and sensitive instruments, Webb will be able to observe the ancient light of the early universe. This will allow Webb to act like a time machine and gives scientists important clues to some of the great mysteries of this era.