The James Webb Space Telescope (JWST) is the most powerful space telescope ever built. Its four instruments, one of which was developed by Canada, will enable breakthrough discoveries in a number of fields of astronomy.

Webb has been in development since the late 1990s and was launched on December 25, 2021 from the Guiana Space Centre in Kourou, French Guiana on an Ariane 5 rocket. 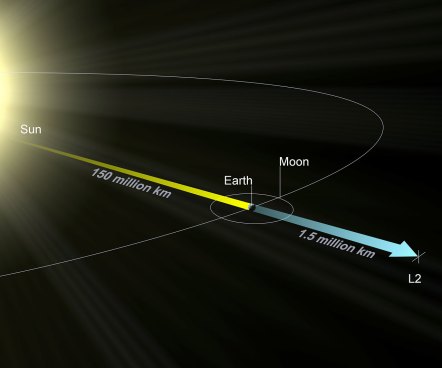 The orbit of the James Webb Space Telescope. It is located at a quasi-stable point called L2, or the 2nd Lagrange point of the Sun-Earth system. Credit: ESA.

Webb contains four instruments that each has unique capabilities that will help answer fundamental questions about our Universe. The Webb telescope’s four science instruments are housed together in a unit known as the Integrated Science Instrument Module (ISIM). Credit: NASA.

The Fine Guidance Sensor/ Near-InfraRed Imager and Slitless Spectrograph (FGS/NIRISS) is the Canadian instrument on board Webb. The FGS acts as the telescope’s eyes, allowing it to point at and focus on objects of interest. NIRISS can both take pictures and gather spectra, or light broken up into a distribution of its colours, in the near-infrared to study a multitude of different objects from exoplanets to distant galaxies. (Instrument Page)

The Near-InfraRed Camera (NIRCam) detects near-infrared light from some of the earliest stars and galaxies formed after the Big Bang, stars in nearby galaxies and our own Milky Way, and distant Solar System objects in a region called the Kuiper Belt. (Instrument Page)

The Near-InfraRed Spectrograph (NIRSpec) collects spectra, like NIRISS, but for up to 100 objects at a time thanks to its innovative microshutter array technology. It will study the formation of stars and the chemical composition of very young, distant galaxies. (Instrument Page)

The Mid-InfraRed Instrument (MIRI) studies mid-infrared light, slightly longer wavelengths than the other Webb instruments. This will help us better understand certain objects in our Solar System such as comets and the birth of stars. MIRI is also equipped with a coronagraph, a mask that blocks the glare of very bright objects to allow us to better see dimmer objects around it. (Instrument Page) 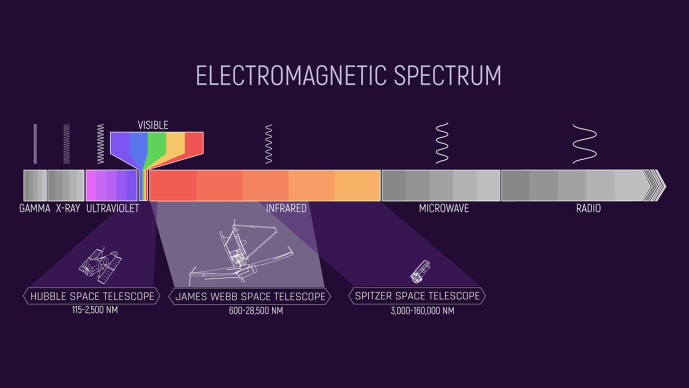 An illustration of the electromagnetic spectrum, specifically highlighting the portions detected by NASA’s Hubble and Spitzer space telescopes along with the Webb telescope. Credit: STScI.

There are many different kinds of light around us, beyond the rainbow of visible light we can see with our eyes. These types of light make up the electromagnetic spectrum and can be categorised by their wavelength. Very energetic light like x-rays have very short wavelengths, radio waves have very long wavelengths, and visible light is somewhere in between.

Studying different parts of the electromagnetic spectrum provides us with brand new information about the object we’re looking at. This is why astronomers make instruments that can study different types of light. The Webb telescope studies infrared light, which is beyond the red part of the visible spectrum. 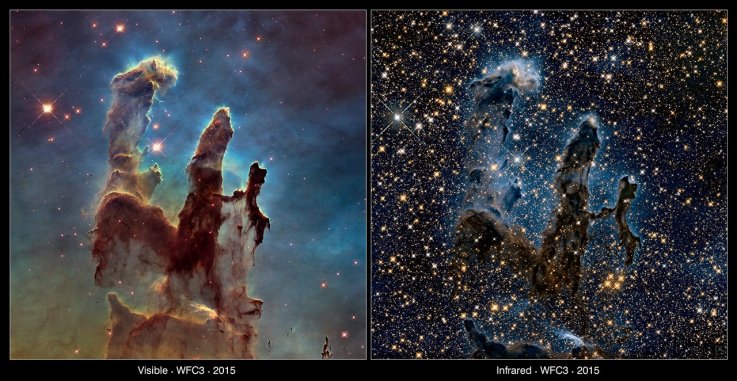 The Orion Nebula can be seen in visible (left) and infrared (right) light as observed by the Hubble Space Telescope. Observing infrared light allows scientists to pierce through the dust and study otherwise unseen parts of our Universe. Credit: NASA/ESA/Hubble Heritage Team (STScI/AURA). 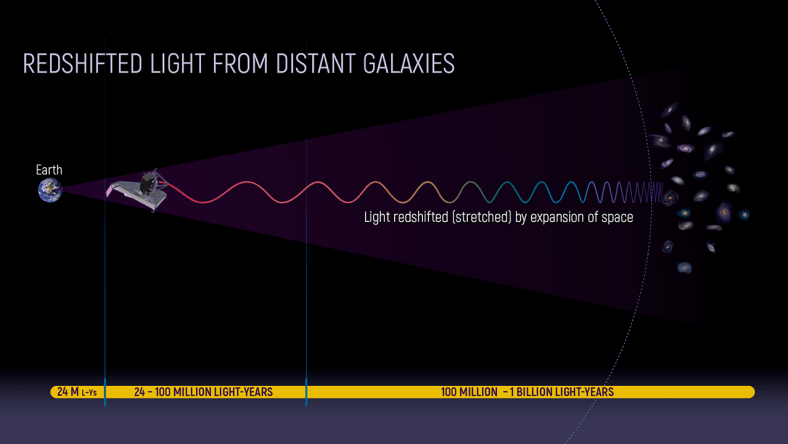 As light travels through our expanding universe, it is shifted towards longer wavelengths. This is called “redshift”. Credit: Space Telescope Science Institute. 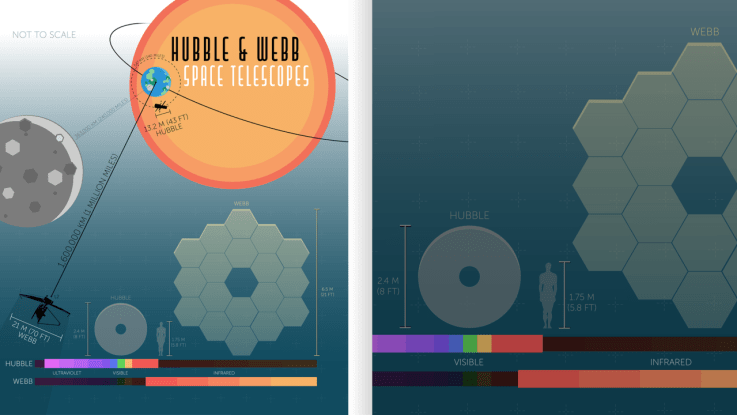 The Hubble and Webb space telescopes will be complementary observatories. The two spacecrafts differ in their size, shape, distance from Earth and observed range of light. Credit: NASA/Space Telescope Science Institute.

Arguably, no telescope has had a greater impact on our understanding of the Universe and the public’s perception of it than the Hubble Space Telescope launched in 1990. The Webb Telescope will build on Hubble’s impressive legacy of astronomy observations and even surpass it in many cases.

The Hubble Space Telescope allowed us to peer further into space than ever before, take breathtakingly detailed images of planets and galaxies, and answer many of the Universe’s great mysteries.

The Webb telescope will be Hubble’s successor, but not its replacement. The two missions have a planned overlap and will work together on new discoveries.

There are, however, many differences between these two space telescopes. Webb has unique capabilities that will allow it to perform science Hubble was not able to do. 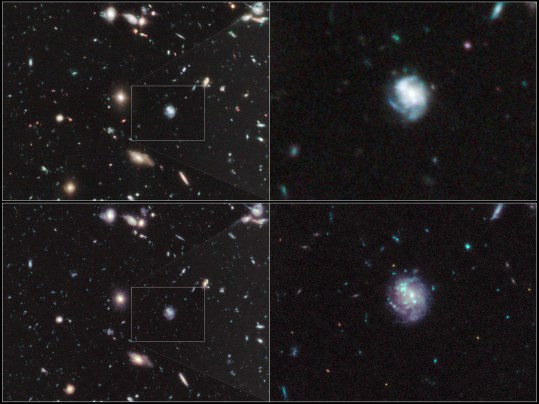 The top row shows Hubble’s famous Ultra Deep Field of distant galaxies with a zoom-in on a single galaxy. A simulated image of the same sky field as seen by Webb, bottom row, shows how much more detailed Webb’s images will be. Credit: Space Telescope Science Institute.

The Webb telescope is an international collaboration between several space agencies:

along with a number of industrial partners: