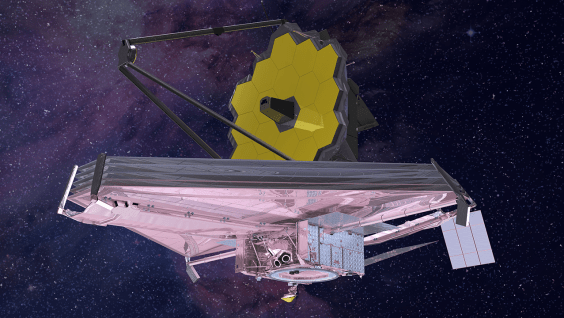 The Webb Telescope is set to be the most important space telescope of the next decade. As a collaborating member of the mission, Canada has a unique opportunity to highlight its technical and scientific expertise in space astronomy through its instrument contributions to the mission and continued support to scientists from Canadian institutions working on the Webb team. 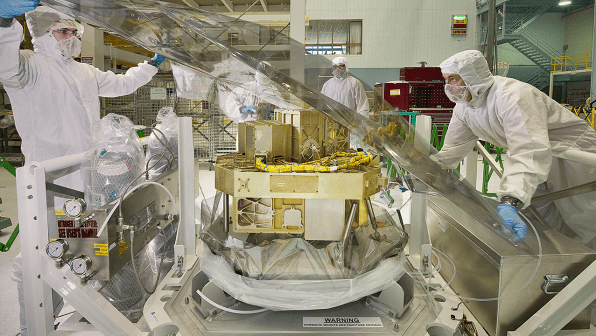 Canada’s contributions to the Webb Telescope, the Fine Guidance Sensor (FGS) and the Near-Infrared Imager and Slitless Spectrograph (NIRISS), was delivered in a single unit to NASA’s Goddard Space Flight Center in 2012. Credit: NASA.

Canada contributed both the Fine Guidance Sensor (FGS) and the Near-Infrared Imager and Slitless Spectrograph(NIRISS) instrument to the Webb telescope. Both components have been packaged together into a single unit the size of a washing machine that weighs about 150 kilograms.

When a telescope wants to take clear images, it needs to point towards the object it is studying and carefully track it in the sky. Webb will move into position for observations using a system of gyroscopes, but it will also need to know where to look.

The Canadian-made Fine Guidance Sensor is an infrared camera that acts as Webb’s eyes. To get clear and detailed pictures of the Universe, Webb uses the FGS to lock on a star position with very high precision.

The FGS and Webb’s system of gyroscopes work together with the final optical piece in Webb called the fine steering mirror (FSM) to stabilise the light beam coming from deep space objects. With input from the FGS, the FSM can tip and tilt tiny amounts very quickly to correct for a jittery lightbeam without having to move the entire telescope. All scientific observations taken by Webb involve the use of the FGS.

Canada’s Near-Infrared Imager and Slitless Spectrograph photographs and gathers spectra from many types of celestial objects. A spectrum shows exactly how bright an object is at many different wavelengths, or colours. This gives detailed information on the characteristics of the observed object. NIRISS uses an infrared camera sensitive to infrared light between 0.6 and 5.0 microns. Once it has captured the infrared light of an object, the light can be broken up into a spectrum using a tool called a grism which is similar to the prisms used to break up sunlight into a rainbow.

NIRISS also has another mode that allows it to take an image and spectra simultaneously using a technique called interferometry which allows scientists to examine objects that are very close together.

NIRISS and all the other scientific instruments will be turned on when they are needed for specific science programs. Commands to do this will be sent from the Webb Science and Operation Center at the Space Telescope Science Institute in Baltimore, USA.

NIRISS will be able to study the atmospheres of exoplanets and determine their composition, observe distant galaxies and examine objects that are very close together in the sky. 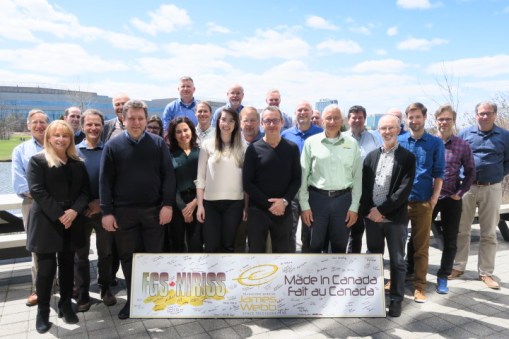 Part of the Canadian JWST Team at a meeting at Honeywell in Kanata, Ontario in 2019.

The Webb science project in Canada is led by:

Researchers from a number of other universities and institutes also make up the Canadian Webb science team:

Funding for the Canadian portion of the Webb mission is provided by the Canadian Space Agency. The FGS/NIRISS unit was built, tested and maintained by Honeywell. Scientists from a number of other institutes have also worked on the Canadian instrument and guidance sensor:

Canadian scientists will be some of the first to use data taken by the Webb Telescope to make new discoveries about the Universe.

Thanks to the CSA’s important contribution to the mission, Canada has guaranteed access to approximately 5% of Webb’s observing time reserved for programs selected through a competitive process for the General Observations (GO) program. These science programs will be chosen on a yearly basis while Webb is operational.

Canada’s contribution of the NIRISS scientific instrument and the Fine Guidance Sensor has also secured 450 hours of Webb time through the Guaranteed Time Observations (GTO) program during the first few years of the mission.

Finally, one Canadian-led science programs has been selected for the competitive Early Release Science (ERS) program which will have priority time during Webb’s first year of observing.

Seven small programs tackling subjects such as rogue planets, brown dwarfs and exoplanets will account for 47 of these hours. The remaining 403 hours will be split between two main programs. Click here for a full list of the Canadian GTO programs. 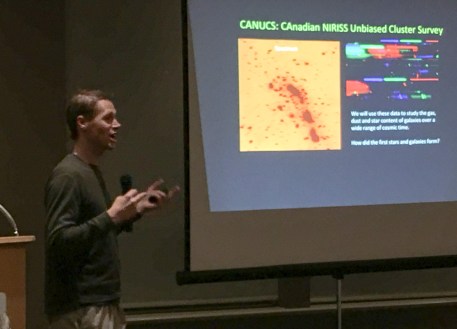 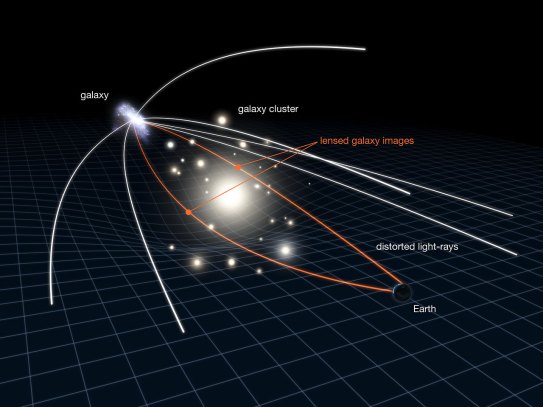 Large masses such as galaxy clusters can deform spacetime. They act like a gravitational lens that deforms the light emitted by background galaxies. The background galaxies can also be magnified, making them easier to observe. Credit: NASA/ESA/L. Calçada.

The NIRISS instrument will collect images and spectra from these galaxies at different periods of the Universe’s history. This will help scientists better understand how galaxies evolved over time.

NEAT: NIRISS Exploration of the Atmospheric diversity of Transiting exoplanets 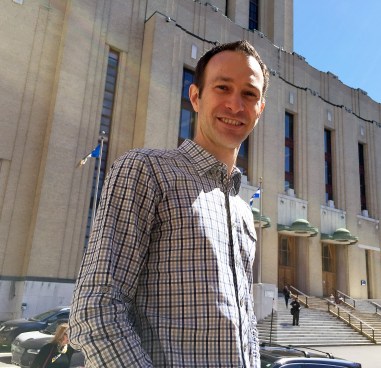 The NEAT program will study exoplanets, planets that orbit stars other than the Sun. Exoplanets are often detected when they pass, or transit, in front of their parent star and dim its light.

While the exoplanet itself blocks the star’s light, some of the starlight passes through the exoplanet’s atmosphere. The NIRISS instrument will collect the spectra of this starlight which will show signatures of certain molecules found in the exoplanets’ atmospheres. This method is called transit spectroscopy. 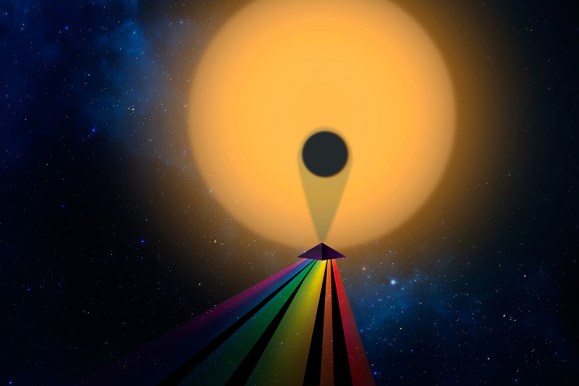 When starlight passes through a planet’s atmosphere, certain parts of the light are absorbed by the atmosphere’s elements. By studying the starlight with these absorption lines, scientists can determine the composition of the planet’s atmosphere. Credit: Christine Daniloff/MIT, Julien de Wit.

Some of the NEAT program’s targets are rocky planets like Earth. The NEAT team hopes to make the very first detection of an atmosphere on such a planet. This could give us clues on whether or not these planets are habitable.

To quickly make the most of Webb’s full science potential, a part of Webb’s first five months of operations has been dedicated to special Early Release Science (ERS) programs.

The proposed ERS programs went through a competitive process before being chosen based on their scientific merit and benefit for the global astronomical community.

One of the 13 chosen ERS programs is led by a Canadian astronomer. 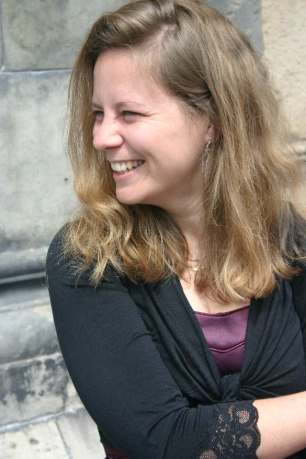 The space between stars is often filled with gas and dust that can be heated by the light produced by these stars. This heating can be so intense that the gas and dust’s chemistry will change and the molecules will break down — or dissociate. These regions are called Photodissociation Regions (PDRs). 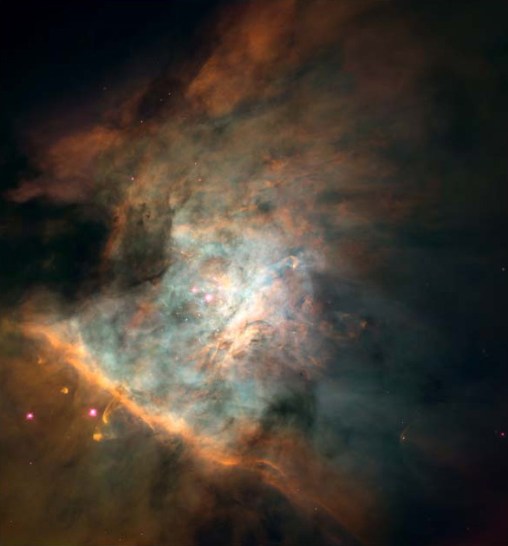 The Great Nebula in Orion is a region of space where stars are being formed from clouds of dust. The bar visible in the lower left quarter of the image is Orion’s Bar, a photodissociation region (PDR), where starlight is heating up and changing the nearby gas. Credit: NASA/C. O’Dell/S. Wong.

One well known example of a PDR is Orion’s Bar, which is part of Orion’s Nebula located in the Orion constellation.

A large part of the infrared light in galaxies is produced by these PDRs. Studying the chemical and physical processes happening in these regions will allow scientists to better understand how stars interact with their environment.