The Single Object Slitless Spectroscopy (SOSS) mode was primarily designed for obtaining high-precision exoplanet transit spectroscopy on bright targets (7 < J < 12). The SOSS uses a cross-dispersed grism (the GR700XD) to obtain spectra between 0.6 and 2.8 microns with a resolving power of R=700 at 1.25 microns. The first order spans 0.8 to 2.8 microns while the second order is from 0.6 to 1.4 microns. A cylindrical weak lens spread the trace along the spatial direction over 23 pixels to minimize flat fielding errors and to enable observing bright targets. Time series observations will continuously stare without interruption at a cadence determined by the chosen readout pattern. The nominal readout mode uses a subarray of 256×2048 pixels (frame time = 5.5 sec) and covers the full wavelength domain. The bright mode reads first order only with a subarray of 96×2048 pixels (frame time = 2.2 sec) thus restricting the wavelength coverage to ~0.9-2.8 microns.

Target acquisition uses the F480M filter either crossed with the NRM pupil (for bright targets) or not (for faint targets). A center-of-light centroid is measured and used to fine-tune the target position (only once) then the Pupil Wheel is set to the GR700XD while the Filter Wheel is set to CLEAR and observations can start. Note that the grating significantly deviates the incoming beam such that the imaging sweet spot is at position X,Y=851,95 to produce spectral traces positioned on the leftmost 256×2048 pixels.

Three readout modes are currently defined for SOSS. Below is a table summarizing them.

The minimum integration time between resets is one frame time. Traditionally, a minimum of 2 non-destructive reads (Ngroup=2) are needed after the reset to produce an integration. In that case, the integration time is 1 frame time, the total wall clock time is  3 frame time (reset+read+read) and the observing efficiency is 33%.  Using ngroup > 2 for fainter targets improves the efficiency defined as eff = (ng-1)/(ng+1). Interestingly, for the SOSS, ngroup=1 is allowed meaning that an integration would simply consist of a reset and a read (reset+read). A superbias (constructed from darks) would be used to obtain the reference bias level with which to compare that single read. With that model, the efficiency is 50% and brighter targets can be observed at the expense of higher (kTC ~40 e-) noise, negligible compared to the dominant target shot noise.

Since there is no shutter in NIRISS, the minimum integration time is set by the speed at which the detector is read out. In the conventional case of Ng=2 (reset+read+read), from the moment that a pixel is reset to the moment it is read twice, it sees light for a minimum of 2 frame time. During that time, flux must remain below the saturation threshold of the detector otherwise information is lost. In the special case of Ng=1, then only a single read is necessary and the minimum integration time is 1 frame time. The smaller the sub-array, the brighter can be an observed star. That is why different readout options are offered.

The SOSS throughput is the product of the telescope, the NIRISS instrument and the detector throughputs and of the grism blaze function. This also includes a 33% loss because mechanical constraints required the grism to be undersized with respect to the pupil. Below is the final SOSS throughput plot and here is an ASCII version. 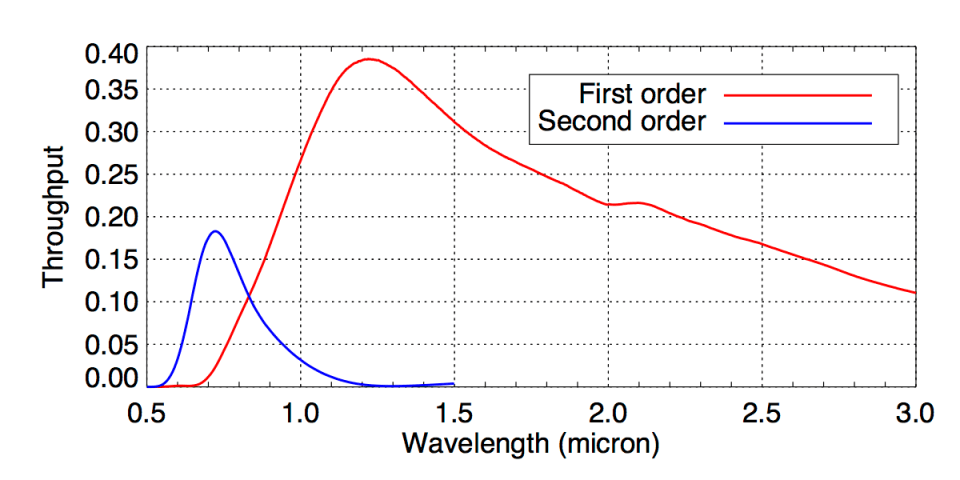 It is useful to know the spectral dispersion per pixel summarized in the table below:

We have developed exoplanet transit simulators and tools for the SOSS.