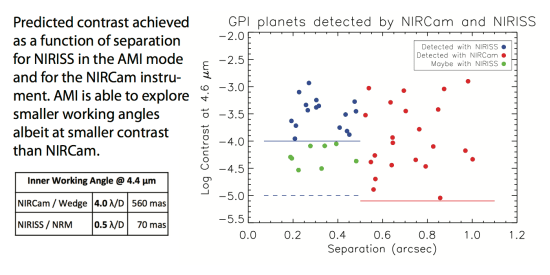 The Aperture Masking Interferometry (AMI) mode uses a Non-Redundant Mask (NRM) in the pupil plane in conjunction with one filter (F277W, F380M, F430M, F480M) to produce an interferogram on the detector that enables better spatial resolving power than the canonical ~lambda/D limit for clear apertures. The NRM is composed of 7 hexagonal holes that span 21 non-redundant interferometric baselines. Careful analysis and modelisation of the astrophysical scene are required to extract the information. That way, the AMI mode explores smaller inner working angles (0.1-0.4 arc seconds) than is possible with other JWST instruments, albeit at smaller contrasts of 8-9 magnitudes.  The added resolving power comes with smaller throughput (the mask admits 15% of the light that makes it to the pupil) so that 1h of integration time on a F480M=8/10/15 mag will achieve a contrast of about 7.0/5.5/3.0 magnitudes. Stars as bright as F480M=3 can be observed. 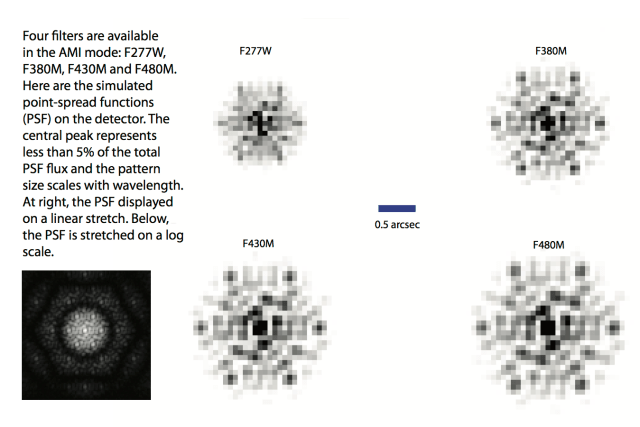 Target acquisition uses the F480M filter either crossed with the NRM pupil (for bright targets) or not (for faint targets). A center-of-light centroid is measured and used to fine-tune the target position within the 80×80 sub-array (only once) then the Pupil Wheel is set to NRM and the Filter Wheel is set to the proper filter and observations can start.  There is possibility to dither to 4 different positions and micro-dither within each dither to 1, 9 or 25 sub positions. However, the best practice currently advocated is to neither dither nor sub-dither but simply stare at a fixed position. For high-contrast observations of dmag>6-7, it is advised to observe a calibrator star within the same telescope visit to calibrate out the systematic wavefront error. Observations consist in a single exposure (if staring) composed of many (hundreds of) integrations, each with a large Ngroup (reads) enough to fill the full well depth. Ngroup may be as small as 2 for particularly bright targets. As an option during target acquisition, a CLEAR image (no NRM) may be obtained to calibrate the scene or to allow absolute flux calibration.

Two readout modes are currently defined for AMI. Most of the observations will use the 80×80 sub-array mode. Fainter targets could conceivably be observed in full-frame mode and still be efficient. The table below gives the saturation limiting magnitudes (Vega) for the four filters.

Extracting information from AMI observations requires a modelling effort and a detailed analysis. Two approaches are studied: one in the Fourier space, one in the image plane. A paper led by Alexandra Greenbaum: “AN IMAGE-PLANE ALGORITHM FOR JWST’S NON-REDUNDANT APERTURE MASK DATA” details the latter approach. The former approach is used for the AMI constrast simulator hosted at UdeM.